Guide for dealing physical/magical damage in melee/ranged battle. The basis of this build is a combination of weapons in the form of Paladin.

The main feature of the build is the variability of the class. It allows you to act as both a Healer and a Melee of the Damager. This build is ideal for Expeditions because of the large amount of control in the War Hammer branch.

The main task of the build is healing allies. The War Hammer acts as an auxiliary weapon to control enemies in Expeditions and PvP.

The Staff of Life 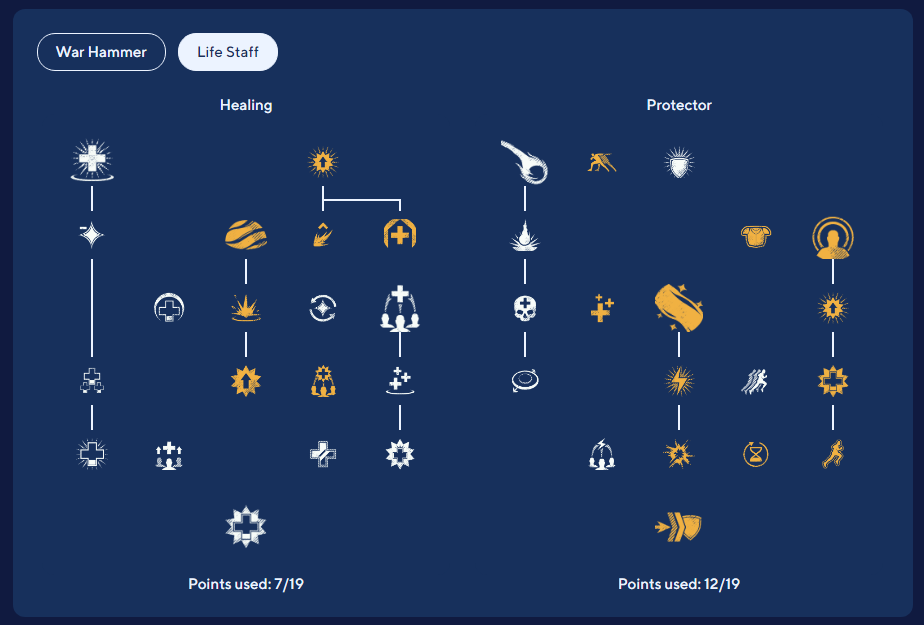 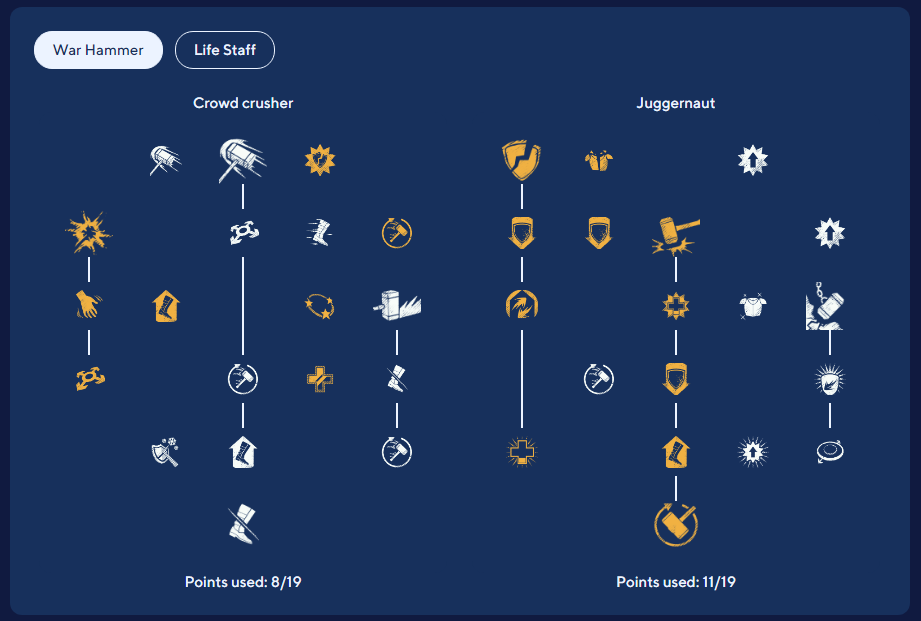 The Staff of Life

Sacred Ground - creates an area for 15 seconds in which allies are healed and 20% weapon damage per second occurs. The passive abilities Holy Ground and Blessed increase healing from this ability and from all healing abilities, respectively.

Beacon - a shot with a projectile of light. Deals 146% weapon damage when hit. Sticks to the target and heals all allies in range by 20% weapon damage per second for 10 seconds. Speed of Light increases additional movement speed for allies by 20%.

Armor Breaker - a powerful strike that penetrates 35% of the target's armor and deals 120% weapon damage. The passive ability Indomitable makes you unstoppable during the animation of this ability, and the Lasting Trauma hangs a debuff of 20% Rend (reducing the enemy's armor by).

Mighty Gavel - jump and hammer strike deals 120% weapon damage. Is a good adding attack because of 2 passive abilities with this skill. Summary Judgment increases damage to enemies with less than 30% HP, Expedite gives you 30% Acceleration, which will help you move to your next enemy.

Shockwave - a hammer blow to the ground that provokes an earthquake within 3 meters and deals 90% damage from weapons. Stuns enemies for 1.75 seconds. Frailty's passive ability puts 10% Weaken on enemies (reduces enemy damage by 10%).

The main tasks during the game in the group are choosing the right position, healing the Tank and the rest of the allies. It is always necessary to monitor the active buffs of allies and update them in time.

In this build, it is necessary to constantly select a Battle Hammer according to the Kd of abilities, in order to use additional control. Shockwave is the most important ability that gives a mill for 1.75 seconds every 20 seconds.

There are two possible equipment options in this build - Light and Heavy Armor. Choosing a light type of armor will give a bonus in the form of a 20% increase in healing, as well as additional mobility. When choosing Heavy Armor, the character will not be as mobile, but this will allow you to survive more attacks from opponents.

Guide for dealing physical/magical damage in melee/ranged battle. The basis of this build is a combination of weapons in the form of Heal Control. Table of contents Introduction Build Description of

Guide for dealing physical/magical damage in melee/ranged battle. The basis of this build is a combination of weapons in the form of Hunter with a Bow. Range 1. Bow + Spear Table