Guide for dealing physical/magical damage in melee/ranged battle. The basis of this build is a combination of weapons in the form of Hunter with a Bow.

This build is great for those who like to keep their distance. The active abilities of the Spear will allow you to overturn the enemy and gain distance again for the possibility of effective archery. The combination of abilities in this build helps to cope perfectly with solo monsters in PvE and be useful in groups and expeditions. 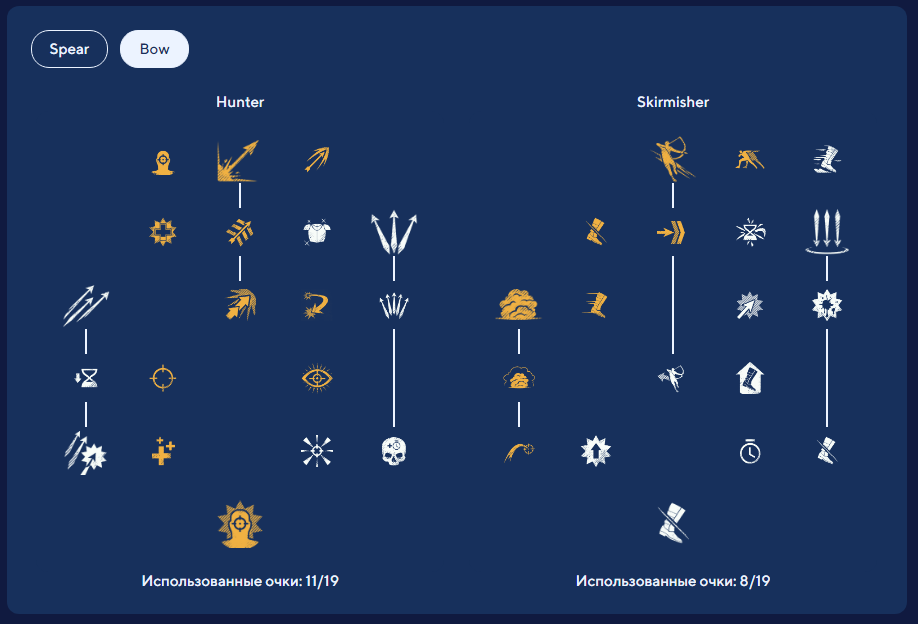 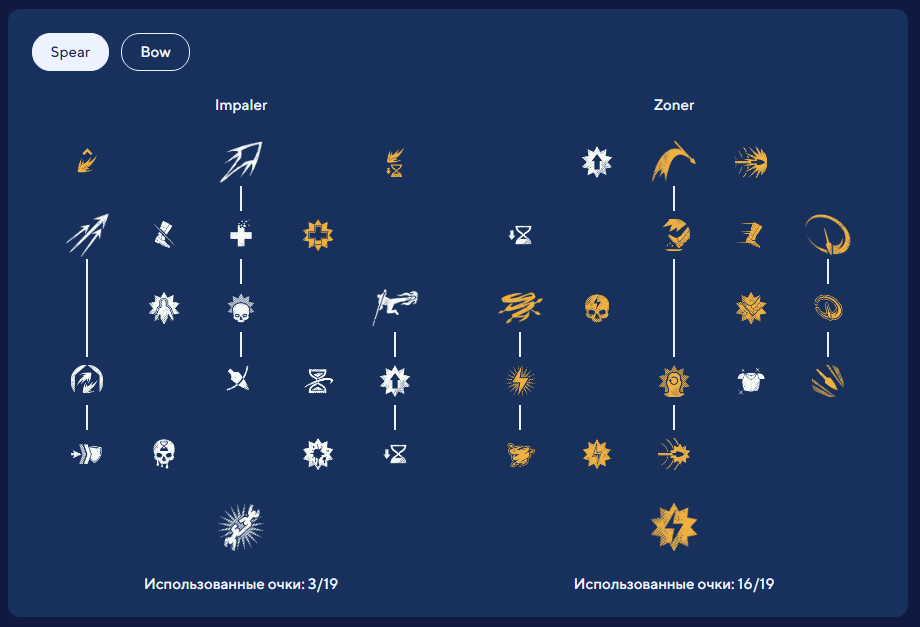 Javelin - throws a spear, dealing 125% weapon damage and stuns the target when hit. Forceful Impact helps to discard the target when hit, and together with the Refreshing Precision and Deadly Distance passives increases the damage from distance and reduces the recovery time of this ability.

Cyclone - spin attack, deals 110% weapon damage. Pushes enemies by 3 meters and imposes a 50% deceleration for 3 seconds. Strong Momentum imposes a Grit on you, which does not allow the enemy to interrupt this ability.

Sweep - a sweeping attack on the legs, deals 75% weapon damage and knocks over enemies. Together with the passive ability, Tenacious Sweep gives Grit. Coup de Grace gives you the opportunity to conduct an additional attack that deals 125% weapon damage, which makes this ability strong in terms of dealing damage to your enemies.

Penetrating Shot - a shot that deals 150% weapon damage and pierces all enemies at a distance of up to 100 meters. Deep Strike makes this ability great for starting your combination. The skill deals 20% more damage to targets 20 meters away and beyond.

Evade Shot - a shot with a rebound of 5 meters, deals 125% damage from weapons. Together with the passive ability, Evasive Knockback drops enemies by 2 meters and also gives you an additional movement speed of 15% for 5 seconds with the passive Go the Distance. This ability becomes mandatory for the set of distance with enemies in both PvE and PvP.

Poison Shot - releases an arrow, which creates a cloud of poison at the point of impact, 3 meters in diameter for 10 seconds. Enemies trapped in the cloud receive 10% weapon damage per second for 20 seconds. Infected Arrows increase damage by up to 12% per second, and Direct Hit causes 200% more damage when hitting an enemy directly. This ability is great for both solo target damage and for killing enemies in packs.

The main goal is to deal damage at a distance. For this, the abilities of Penetrating Shot and Poison Shot are excellent. In a dangerous situation, the main task is to use Evade shot. This is an ability for dangerous situations that will help you gain distance and receive additional movement speed.

If it is impossible to move away from the enemy, this build has a lot of control in the form of spear abilities. You can both knock down the enemy with the Sweep ability and push away your rivals with Cyclone and Javelin abilities. This combination will help you get extra time to roll back abilities on the Bow. After that, we can repeat everything over again in the form of our abilities from the Bow.

The main task - not to fall under the focus of opponents, so in PvP our choice is definitely light armor. In PvE, you can use both Heavy Armor to be able to withstand several blows, and Light Armor to deal additional damage of 20%.

Guide for dealing physical/magical damage in melee/ranged battle. The basis of this build is a combination of weapons in the form of Heal Control. Table of contents Introduction Build Description of

Guide for dealing physical/magical damage in melee/ranged battle. The basis of this build is a combination of weapons in the form of Paladin. Table of contents Introduction Build Description of abilities

GOSU.AI Blog — League of Legends, Dota 2 and PUBG research and analytics
—
New World: Hunter with a Bow
Share this