Guide for dealing physical/magical damage in melee/ranged battle. The basis of this build is a combination of weapons in the form of Heal Control.

This build combines 2 popular classes at once, this is a Tank and a Heal in a party. You can easily change the build, turn from the main Heal into the Main Tank of the group. The build contains both Heal + Buffs of the Life Staff, and interesting debuffs + damage of the Sword. An important part of the build is debuffs - Rend (Armor reduction) is very useful in Expeditions, and Slowing down will greatly help in PvP activities. 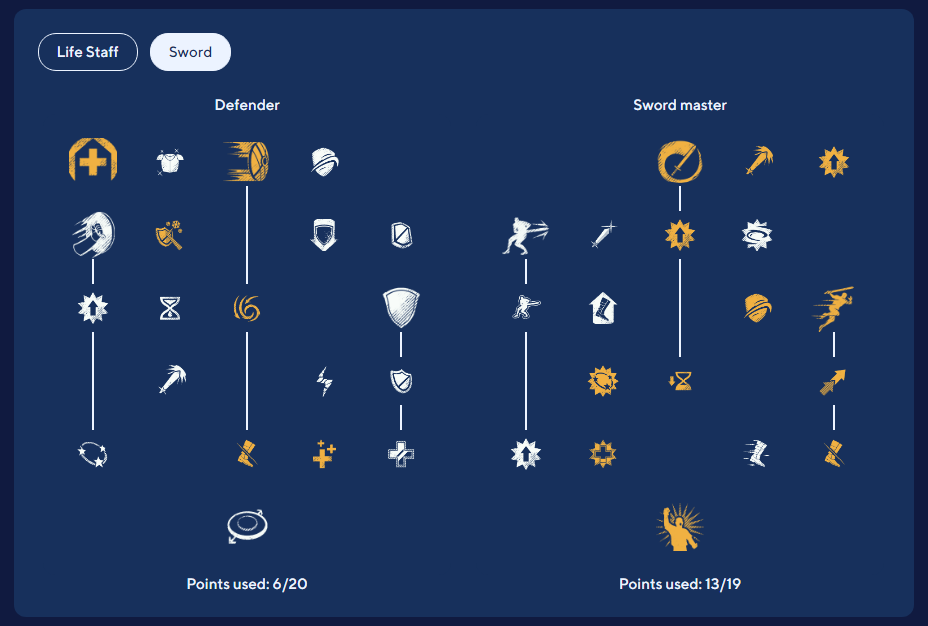 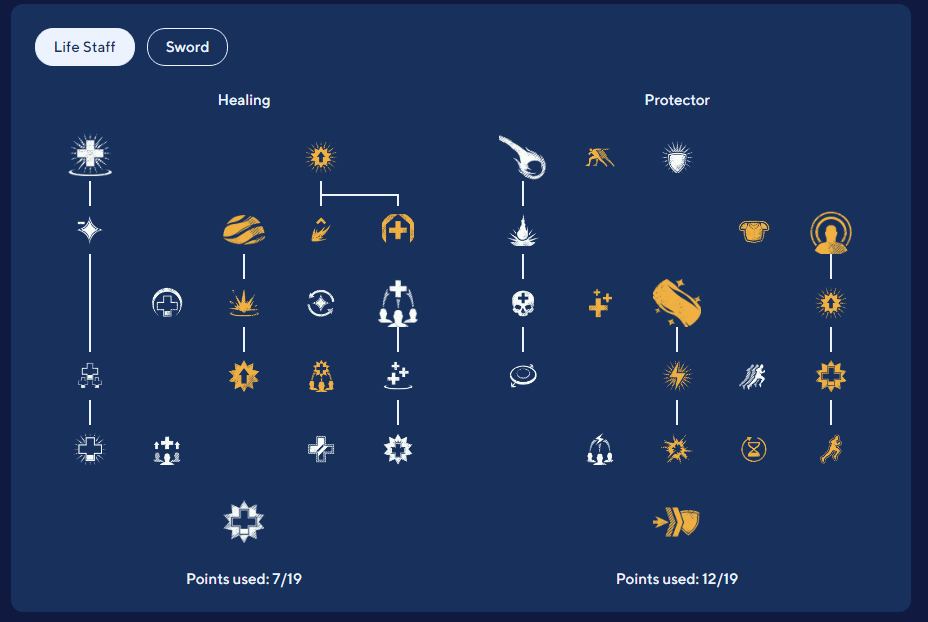 Leaping Strike - jumps 4 meters and deals 135% weapon damage. Deals more damage to targets with 30% HP or less when leveling the passive ability of Final Strike. Great for PvP activities because of the Cowardly Punishment passive ability, which allows you to slow down enemies in the back for 8 seconds!

Shield Rush - makes a dash for 5 meters, inflicting 125% weapon damage to the enemy and knocks the enemy off his feet. Improved Rush with a successful attack, imposes a Weaken on the opponents that will reduce their damage.

Sacred Ground - creates an area for 15 seconds in which allies are healed and 20% weapon damage per second. The passive abilities Holy Ground and Blessed increase healing from this ability and from all healing abilities, respectively.

Beacon - a shot with a projectile of light. Deals 146% weapon damage when hit. Sticks to the target and heals all allies in range by 20% weapon damage per second for 10 seconds. Speed of Light increases additional movement speed for allies by 20%.

The main tasks during the game in the group are choosing the right position, healing the Tank and the rest of the allies. It is always necessary to monitor the active buffs of allies and update them in time.

There is also an additional feature hidden in this build, in the form of slowing down, Debuffing Rend (Reducing armor) And Weaken (reduction of damage inflicted by enemies) on the Sword weapons, so an important feature is the switching of weapons and the imposition of these debuffs.

The main task is not to fall under the focus of opponents, so in PvP our choice is definitely light armor. In PvE, you can use both Heavy Armor to be able to withstand several blows, and Light Armor for more healing in an Expedition on your tank.

Guide for dealing physical/magical damage in melee/ranged battle. The basis of this build is a combination of weapons in the form of Paladin. Table of contents Introduction Build Description of abilities

Guide for dealing physical/magical damage in melee/ranged battle. The basis of this build is a combination of weapons in the form of Hunter with a Bow. Range 1. Bow + Spear Table